Are you the electricity or the bulb?

This post was hard to write. Lots of ideas (too many bulbs?), not a lot of thinning or organization (mixing metaphors, I know), and a difficulty in staying on track with the organization of the piece. Partly because it’s a stretch to say that batteries are closely related to light bulbs and electricity.

This post is about harnessing your energy, your natural energy, and finding your reserves when you feel you have lost them.

This post is about strategically finding or creating flow to generate a creative environment/atmosphere. Two suggestions for marketing and sales when these processes lose their flow. After I wrote the marketing piece I thought I should take my own advice (hmmm…).

1800 Volta invents the first battery, known as the voltaic pile.

1836 Daniell invents an improved battery capable of operating at 1.1 volts and used in early telegraph networks.

1912 Lewis started Lithium battery research, but it took 60 more years before they became mainstream in small devices like cameras and cell phones.

1955 Urry at Union Carbide improved upon alkaline battery design to lower their product costs — now making it possible to power a laser pointer to distract our cats.

1983 Borst invents the potato clock as a mass-produced science fair product. It works the same way batteries work: mild phosphoric acid, naturally occurring in potatoes and other starches, results in a chemical reaction where electrons are freed from the zinc probe (negatively charged) and accepted onto the copper probe (positively charged). Boil the potato and the electrical capacity of the potato increases 10 fold! 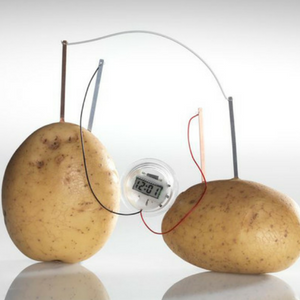